Clonusker was quickly turned out again today at Lingfield, only seven days after his Plumpton win.  The 7 pound penalty that he carried was likely to be less than his future rise in the handicap, and with only five declared it was an opportunity not to be ignored.  Again ridden by Tom Garner, he was settled in third place for the early part of the race.  He was moved into the lead going to the top of the hill on the far side and he held onto his advantage into the home straight.  He had one other horse beside him up the home straight as they pulled clear of the rest, but after jumping the last together the other horse proved just too strong on the day and Clonusker finished 2nd, one and a half lengths down.  It is possible that if he hadn't had to take this chance so soon after his victory that the outcome might well have been different. 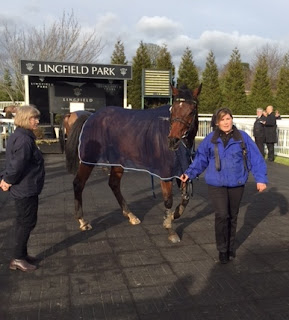 Clonusker after his 2nd place.