Karen took Kingscombe, owned by Peter Oppenheimer, to the Heathfield Show to compete in the Novice ROR class.  Pleased to report that they won, gaining qualification for the Aintree finals in August. 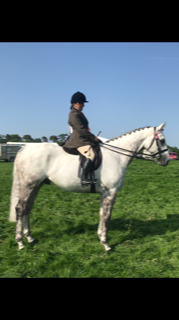 Katie also had a successful day there, having four wins with her sheep and being reserve champion. 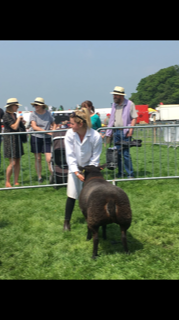 It was a lovely day for the Royal Wedding and the occasion was marked with a special cake at breakfast. 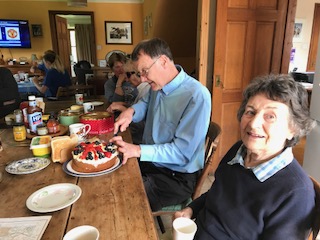 Cutting into the Union Flag cake.
But it was an even better day for watching horses on the gallops 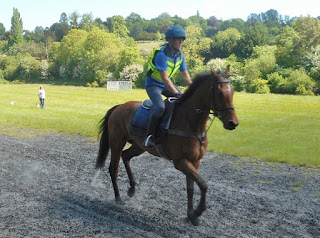 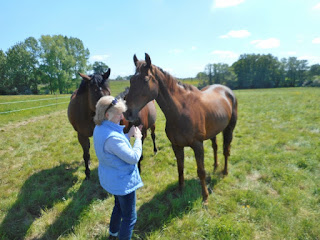 A Day Of Highs And Lows At Huntingdon.

Linda took four horses to Huntingdon today providing a mixture of emotions.  Cockney Seagull was first to race and he started the afternoon well by winning the "Best Turned Out" prize for Alex. 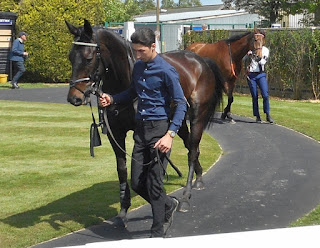 Alex leads round Cockney Seagull
However that was as good as it got for him as he disappointed again and was pulled up.

Both Jolly Jet and Hab Sab took part in the next race, a novices handicap chase,  and once again the stable took the "Best Turned Out" prize, this time with Jolly Jet and Karen.
Once again, however, the race was disappointing.  Jolly Jet jumped well in her first ever chase but both horses were pulled up by the home turn when tailed off.

The next race saw Mab Dab take a step up in class in the long distance handicap hurdle.  Ridden by Tom Garner he was settled at the rear for the first circuit before moving up to take close order with a mile to run.  He continued to make progress and led into the home straight.  Although he kept on, two other horses found even more and he finished 4 lengths third but still a very good performance to make the journey home a happy one. 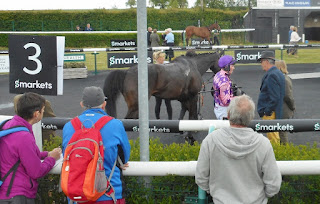 A great day to be at the races.

Brighton was the place to be on Tuesday where owners of Dragon Tattoo were able to enjoy a beautiful early summer's day in the sunshine. 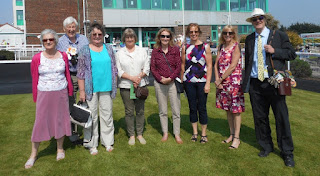 Dragon ran better than last time, finishing 6th and earning a little prize money to top off a really pleasant day.
Posted by info at 00:28 0 comments