The Christmas quiz contest between the Stable Staff and the Owners was won this year by the Stable Staff 43.5 points to 42.  The Owners will cite their depleted numbers on the day as the reason for their demise, but would greater numbers have helped or added to their confusion in the "bizarre racing facts" true or false round where both teams managed a meagre 2 out of 10? 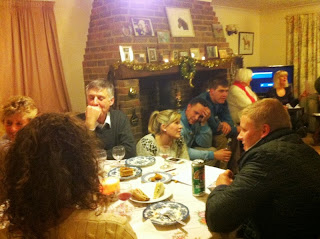 The evening concluded with the ever popular paper horses handicap races where again honours were just about even. 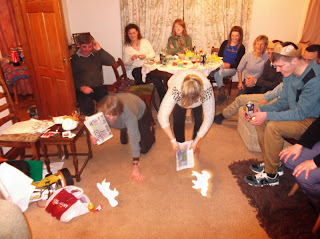 Valence Racing had a good day at Plumpton today with both their horses finishing in the frame.  First Itoldyou finished third in a 3 mile 2 furlong chase, then Clonusker showed his first sign of real form by finishing second in a 2 mile handicap hurdle. 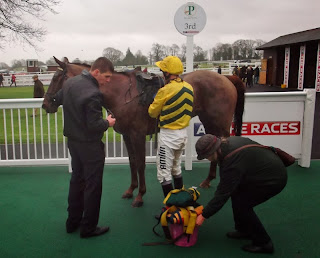 Itoldyou being unsaddled after finishing 3rd.
Ridden by Andrew Thornton, Itoldyou was held up at the rear for the first couple of circuits and then was moved up to challenge the front runners down the final hill.  A mistake at the 4th last didn't help his cause but he managed to stay on up the hill for third.
In the final race of the day Clonusker, ridden by Gerard Tumelty, made all the running and had broken most of his rivals by the time they entered the home straight.  One horse loomed alongside him here and he had to settle for second, but a very pleasing result nevertheless.
Posted by info at 11:02 0 comments 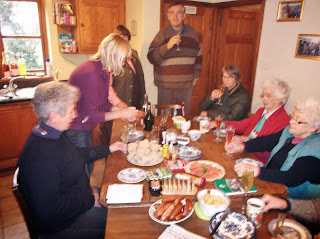 It was a champagne breakfast this morning to celebrate Itoldyou's Plumpton victory.  Accompanying the champers were smoked salmon, baked cheese nibbles, ﻿pate, poppy seed crackers with special cheese delicacies and chocolate and caramel shortcakes!  Even so the regulars still managed to consume nearly fifty large sausages between them!
Then it was time to watch Linda supervise a session on the track for Itoldyou and others. 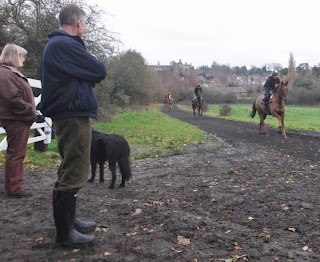 Itoldyou won his first race under rules today in a 3 mile 2 furlong handicap chase at Plumpton. 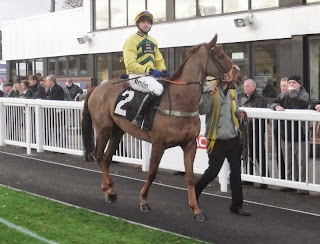 Ridden by Andrew Thornton, he was allowed to travel at the rear of the 4 horse field for the first two circuits so that he didn't know that he was having a race.  He took closer order going into the railway bend for the final time, then took his chance when a gap opened up on the inside rail entering the home straight.  He hit the front two fences from home and never looked in trouble from there on.  A good jump at the last sealed it for him and all the backers who had made him the 7/4 favourite for the race. 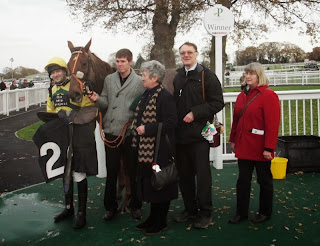 So who reads the blog?

So while we are all avidly reading "The Racing Post" Linda has discovered that they are reciprocating by reading this blog page.  Linda was surprised when they rang her for more information about one of the horses, to expand on what they had read here.  Hopefully we will be able to provide further positive stories for their pages in future. ﻿