Back Where He Belongs.

Kingscombe retuned to Southwell today, a track where he has won seven times before, and showed his liking for the fibresand by finishing 2nd.  Jockey Rab Havlin got him out well from his number 6 draw, in the 9 runner field, and carefully edged over to towards the rail to take up second position, a horse width out, entering the first bend in the mile and a half handicap.  He maintained this position until 4 furlongs out where he had to be pushed along.  He was in third place rounding the turn for home but responded to the pushing and ran on well into second place at odds of 25/1.  He was never going to catch he winner who beat him 5 lengths but had the favourite three quarters of a length behind him in 3rd. 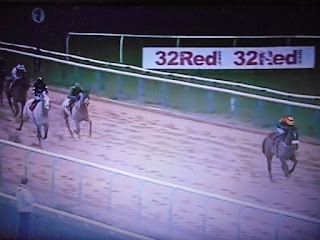 Kingscombe battles for second nearing the line.
﻿
Posted by info at 06:33 0 comments

One Step At A Time.

After finishing 5th and then fourth in his previous two races, Claude Greenwood went one better by finishing 3rd at Kempton today.  We were pleased when jockey Rab Havlin told us that there would be no pace on, as we wanted Claude to get an easy lead. Trying a mile and a half for the first time, he broke well and got the lead he wanted.  He led at his pace, sometimes 3 lengths clear, before the field closed up on the turn for home.  Rab had left a little in the tank to stretch for home but by a furlong out he was down to third.  Two more horses came along side him but this time he was able to show battling qualities and pulled away from them in the final 100 metres to claim a clear third, beaten a neck and 2 and a half lengths but one and a quarter lengths ahead of the fourth placed horse. 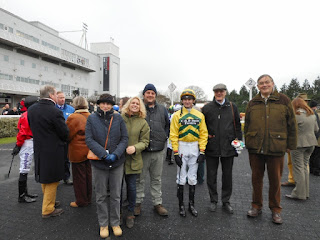 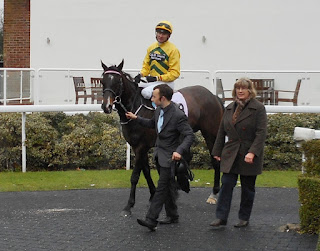 Claude is led in after finishing 3rd.

With freezing weather conditions causing the local hunt to cancel the planned perk up trip for Red Anchor and Kingscombe turned into a trip to the beach at Camber.  Karen and Frankie had a great time chilling out with the horses and took some great mood photos. 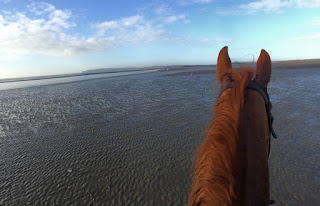 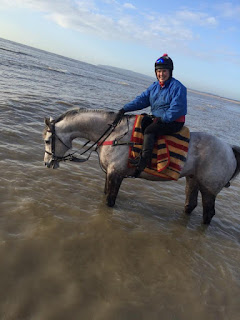 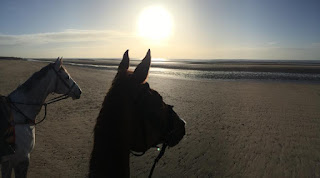 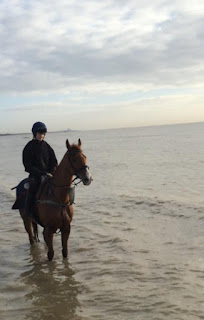 Not A Total Washout, It Was Fine For Some!

Linda's four horse raid on Plumpton's New Year's Raceday was almost washed away as the rain kept falling, sending rivers down the track and forecourts to form lakes in the home straight, before racing was abandoned after race three.  However there was time for Fine Tune to make the frame for the first time when finishing third in the opening Novices' hurdle.  Ridden by Tom Garner he was kept in midfield early on before moving into 4th going out on the final circuit.  However he seemed to have done his running when dropping back to 6th on the bottom bend.  But as others cried "enough" in the testing conditions he seemed to enjoy slopping through the mud and he plugged on past tired horses to finish third and earn some prize money for his much deserving owner, Rosemary Watson. 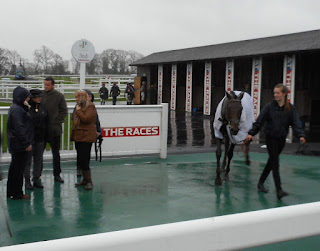 A bedraggled Fine Tune and connections after the race.
Posted by info at 09:19 0 comments