As they say, "Where there's muck there's money!"

After surviving an early morning inspection after severe overnight rain and further outbreaks during the morning and while racing, Plumpton went ahead and provided Kayflin with the opportunity to put her disappointing Leicester run behind her.  This she did in good style despite the conditions.  Ridden by Tom Garner in the two and a half mile contest she was settled, as instructed, towards the rear but in touch.  Jumping well she stayed there for the first circuit and a half, ignoring the mud flying around her.  She made good forward progress down the hill on the final circuit, still jumping well, to challenge the all the way leader rounding the station bend.  Entering the straight the leader had saved a little and pulled clear leaving Kayflin to battle on to hold on to second place and more prize money. Mind you most of it will be spent cleaning the silks and tack! 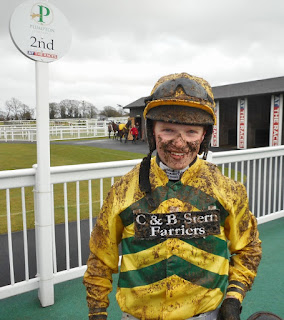 This is Tom Garner after the race, imagine what Kayflin was like!

Earlier on the card Dick Churcher saw his Indispensabelle have her first run over hurdles and was delighted with her jumping and finishing position of 5th. 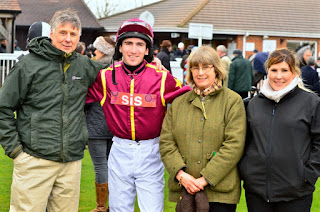 Dick, Tommy Dowling, Linda and Karen before the race. 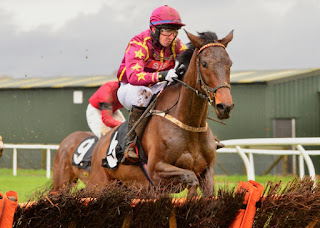 Indi shows she can jump.