It was Ladies Day at Plumpton today so it was fitting that Kayflin should put in a good performance.  She was the outsider of the six runners in the 3 mile 1 furlong handicap hurdle, ridden by Jack Sherwood.  The race was run at a crawl over the first two circuits with Kayflin lobbing along sweetly towards the rear.  As the pace picked up she moved forward down the back straight taking second place entering the railway bend just behind the eventual winner.  They moved away from the others up the home straight, but the winner was always holding her and Kayflin had to settle for a creditable second place.  On top of that Ollie won "Best Turned Out" with her.
However, not to be outdone, Madam Anna, making her racecourse debut went one better in the closing bumper.  Again ridden by Jack Sherwood she spent the first circuit towards the rear of the tightly packed 7 runners.  She moved closer to the leaders down the back straight second time round and moved into the lead round the bend.  In truth it was quickly all over as a contest and she ran out a very easy and impressive winner.  So the two girls did brilliantly on Ladies Day. 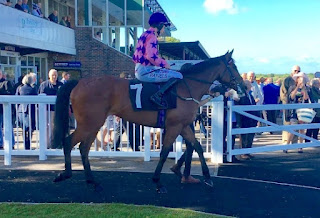