Mab Dab back to form.

Mab Dab put his recent disappointing Kempton run behind him by finishing second in a 3 mile 1 furlong handicap hurdle at Fontwell today.  He was possibly aided by the increase in trip and return to a left handed course.  Under Jack Sherwood he was switched off at the rear of the bunch for the first two circuits.  He was asked to take closer order going out on the final circuit and initially looked to be struggling.  However he gradually responded to his rider's urgings and, jumping fluently, he made his way forward to share the lead with the eventual winner nearing the bottom bend.  The winner was travelling easily and pulled away leaving Mab Dab to fend off the challengers.  This he did all the way up the home straight, gamely holding on to second place. 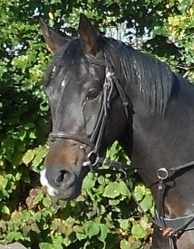