Red Anchor won his first ever race today (12/2/2013) in the mud at Lingfield.  Andrew Thornton and Linda decided to employ different tactics and he was sent straight to the front at a sensible gallop in the conditions.  He jumped well, with the exception of the final ditch where jockey and horse had different ideas about when to take off, and he responded to Andrew's urgings coming down the hill to the home straight.  He continued to run on and sealed it with a good leap at the last.  It was great for his owner, Sally Stanier, who has been very patient with him and for those who backed him at S.P. 20/1 or better. 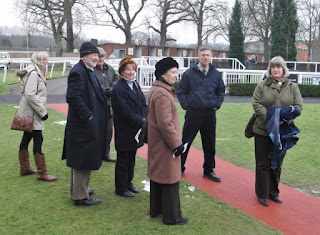 Anxious connections before the race. 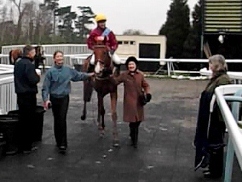 Sally leads her winner in. 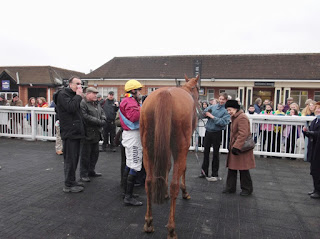 Who's a clever boy! 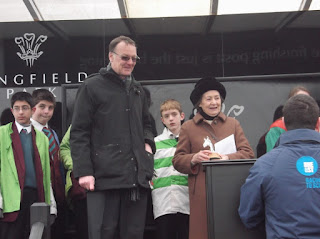 And a trophy as well!
Later in the afternoon, Itoldyou finished 3rd in a novices handicap chase.  Andrew Thornton again rode and employed similar tactics.  This time however Itoldyou was unable to hold his lead entering the home straight and had to settle for last of the three finishers and a prize of £500.
Posted by info at 15:17