Fun In The Sun And One Won!

The sun came out, the ground dried up and Linda and the team had a great time at Fontwell.  At last the ground had come right for Mab Dab in the 2 mile 6 furlong handicap hurdle.  Tom Cannon, who had already ridden two winners on the card, was the jockey and he had Mab Dab close up behind the leaders on the outside.  He jumped well throughout and maintained this position as other runners dropped away.  He held second place rounding the bottom bend for the final time and pulled away up the home straight to win by 8 lengths and giving the yard a great boost into the bargain.  This was Mab Dab's second "win" of the afternoon as he had also won the "Best Turned Out" award for Oliver. 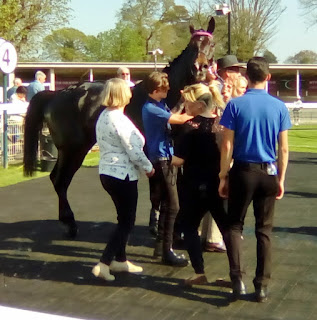 Mab Dab has that "Haven't I done well look" with connections after the race. 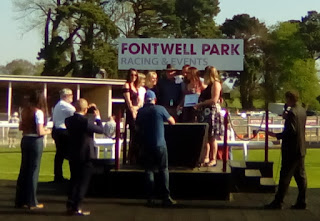 Connections at the presentation.
Earlier in the afternoon Wontstopmenow had his first race over hurdles.  Ridden by Jack Sherwood he raced on the outside of the field to get a good sight of his hurdles.  He jumped well in the main though was careful over a couple, especially as he had the attention of a loose horse for much of the race.  He remained in touch until the bottom bend where more experienced rivals pulled away.  Nevertheless he kept going to finish 6th of the twelve who started this novices hurdle and did more than enough to suggest he can have a successful career in the game.  Like Mab Dab he also notched up victory for Oliver in the "Best turned out" award. 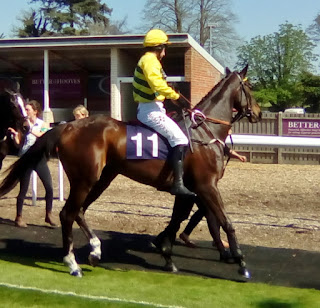 Wontstopmenow goes out for his first ever hurdle race.
Cockney Seagull also raced in the novices hurdle and was in the front two for a large part of the race before fading in the heat and being pulled up.