There are many disappointments in racing and today was one of those days.  Jack Sherwood rode Kayflin at Plumpton in her return to fences.  The race was a 2 and a half mile handicap for conditional jockeys.  She was calm in the paddock before the race, always a good sign with her. 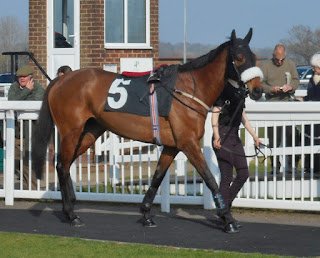 Jack had her towards the back of the five horses early on, as instructed, and she travelled well with the favourite making the running.  Coming past the stands with a circuit to go she moved into second place and took closer order with the favourite to his outside.  They seemed to be creating a gap between them and the others approaching the fence going to the top of the hill.  Here the favourite blundered, unshipping his jockey, before diving right into the path of Kayflin who could not avoid him.  Despite a valiant effort Jack was unseated and then trodden on.  While there is no way of telling what would have happened without this melee, Kayflin looked to be going very well, starting to pull away, and Jack is convinced she would have won. 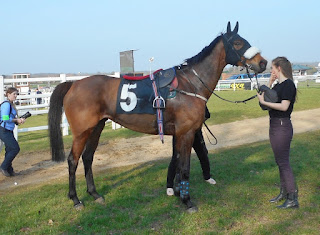 Kayflin recaptured after the race.