Sams R Man, owned by Valence Racing, made his debut at Kempton on 1st August and it was a tough lesson to learn.  In a field of 14 he was drawn one from the outside and was startled when the gates opened, leaving him quickly a few lengths behind.  He made up some of the ground and was passing a horse on the outside when it swung out and nearly knocked him over.  Again back on his heels he found his rhythm again but began to tire in the home straight and, losing touch, he was not punished in the final furlong or so. 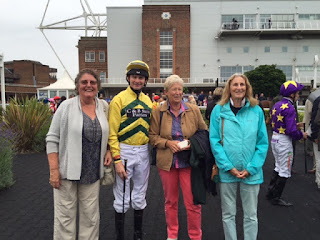