It's A Sheila Thing made the long trip to Wolverhampton worthwhile when she showed improved form, according to official ratings, to finish third in the claiming race.  Upped in trip to 9 and a half furlongs and ridden by Steve Drowne she was always close to the pace.  She came up the rail in the home straight where she was hampered, but switched out she ran on to finish third under three lengths behind the much higher rated winner. 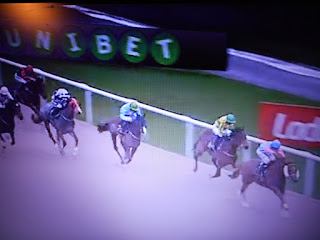 It's A Sheila Thing pulls out in third after meeting interference up the rail.
Posted by info at 13:04