Back to the sands, back to winning ways. 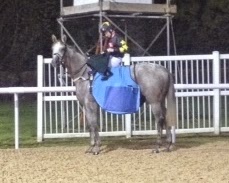 ﻿
Kingscombe returned to Southwell, his favourite course, and made it seven wins from eight starts at the Nottinghamshire track.  Drawn widest of the six runners in a class 4 handicap over 2 miles, he raced on the outside in the early part of the race under jockey Robert Havlin.  He tucked in to 4th position, tracking the leaders, going out on the final circuit.  He was asked to move up when nearing the far turn and made smooth progress on the outside of the favourite rounding the bend.  The two then had a battle royal up the straight with Kingscombe coming out on top at the line to win by a neck, with another 14 lengths back to the third placed horse.
Posted by info at 07:38