Celestial Ray, who has run some good races recently without making the frame, finished second in a mile handicap on the all weather at Lingfield this evening.  Ridden by Seb sanders, he broke well and was prominent throughout.  He lay third coming off the bend into the home straight and ran on to go second and leave the chasers behind.  Unfortunately the leader seemed to have a lot in hand and continued to pull clear, going on to an easy victory.  Celestial Ray would be unlucky not to win a race soon in his present form on his current handicap mark.

Earlier at the meeting Emmelia won her first "Best Turned Out" award, £50, with Claude Greenwood, the second time in a week that he has been judged the best. 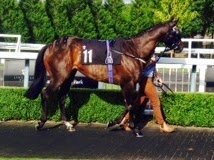 "Best Turned Out" Claude Greenwood﻿
Posted by info at 12:17