The regulars had an interesting time today that illustrated the diverse features of stable life. First was the opportunity to watch Running Bull school over jumps.  After the disappointment of last Saturday's outing on the all weather at Lingfield he will be tried over hurdles at Stratford next week.
Then over a breakfast of sausages, bacon, scrambled egg, toast, chocolate brownies and lemon slices, Linda described her trip to France during the week.  She had met up with Nick and Sue Davies to discuss their horses, then visited Deauville Racetrack to view the sales and learn more about French racing with the intention of sending runners there in the future. 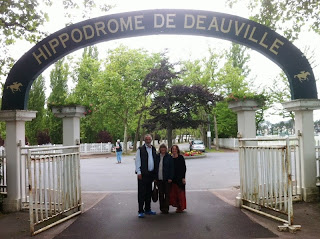 After that Rosemary's unbroken 2-y-o filly was brought out into the sunshine for inspection while plans for her future career were mulled over. 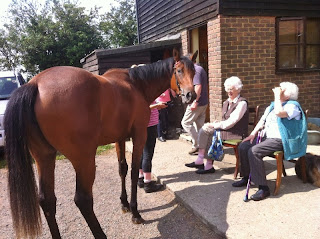